Alzheimer’s disease is ravaging the lives – and independence – of older Americans every year. And it’s showing no signs of slowing down.

In fact, it’s estimated that nearly 6 MILLION Americans over the age of 65 are living with Alzheimer’s right now… with that number expected to skyrocket to 14 million by the year 2060!

And while there is no cure for this devastating brain disease, it hasn’t stopped scientists and researchers from working tirelessly to find clues that can help with an early diagnosis of Alzheimer’s.

Well, thanks to the work of renowned researchers, a simple memory test has been developed right here in the U.S. that could very well reveal the early signs of Alzheimer’s… and could one day change the way this devastating disease is treated.

Here’s a sneak peek at this potential Alzheimer’s breakthrough.

Researchers at the Albert Einstein College of Medicine in New York have developed what they call a “simple memory test” that depending on a participant’s score, can indicate the very early signs of memory impairment associated with Alzheimer’s and dementia…

Often YEARS ahead of an official Alzheimer’s diagnosis.

The gist of the test is simple…

Study participants were shown pictures of items and given cues about its category, (i.e., a picture of grapes with the prompt of “fruit”). They were then asked to remember the items – first on their own, then with the category cues for any items they did not remember.

The scores of the testing were then grouped into four different stages.

Claim a 20% discount on any TURAPÜR product and other exclusive offers when you sign up for text messages now!

By texting TURAPUR to 443-312-5450, you are providing your electronic signature expressly consenting to be texted (using automated means) with alerts, stories, reports and marketing communications from NewMarket Health Products, LLC about NewMarket Products at the phone number you provide on this form, including landlines and wireless numbers, even if the phone number is on a corporate, state or national Do Not Call list. You also consent and unconditionally agree to our Privacy Policy and Terms and Conditions, including the arbitration provision and class action waiver contained therein. Msg&data rates may apply. 10 Msgs/Month. You are not required to agree to this as a condition of making a purchase. Text Help20 for Help, Stop to Stop.

Stages zero through two represented folks who had some trouble remembering items on their own, but were generally able to recall everything with a prompt.

But stages three and four represented an increased inability to remember things, even with multiple prompts. This is important because this is a hallmark symptom of Alzheimer’s that usually starts to take shape one to three years before a diagnosis.

The study also used brain scans and found that the folks that score high (stage three and four) showed higher biomarkers associated with Alzheimer’s (like higher amounts of beta-amyloid in their brains) than people in the lower stages.

This testing is still in the research phase, but the initial results are very promising and researchers hope to use it as a springboard for more human testing… and to one day use it as a valuable tool to help identify the very early stages of Alzheimer’s.

It’s important to note that IF this test becomes mainstream and part of the continuum of care for Alzheimer’s… it is NOT a cure. But it could help millions of older adults get ahead of Alzheimer’s.

In the meantime, if you have a history of Alzheimer’s in your family, or are showing signs of mental decline, continue to work with your doctor on a treatment plan that is tailored to your needs.

We will continue to monitor the progress of this latest Alzheimer’s testing research.

When it comes to ‘dirty’ air – or even air pollution – and your health, what comes to mind?  Coughing… sneezing… allergies… asthma or other respiratory issues?  Those are all certainly things that can happen if you breath in dirty air on a consistent basis.  Now, you may also think that as long as you...

The COVID-19 pandemic feels like it is finally starting to show signs of slowing down – and perhaps finally entering the endemic stage (like the flu).   But it doesn’t mean we are out of the woods yet… and it doesn’t mean we’re not continuing to learn more and more about the virus’ lasting impact on...

Let’s face it. You’re not yourself when you don’t get enough sleep.  Just one bad night’s sleep can make you feel like the walking dead the next day.  And if you suffer from poor sleep, chances are your friends, family, and even your doctor have all fed you a laundry list of ‘remedies.’  From sleep...

Revealed: The DIRTIEST Thing In Your Home

Take a moment and think of the dirtiest things in your home…  What comes to mind?  Your toilet… your floors… your bathtub… or maybe even your TV remote?  Those can all certainly be riddled with germs and bacteria when not cleaned on a regular basis.  But according to a new study, there’s something else in...

It’s a condition that affects nearly 50 million Americans…  And nearly 30% of the WORLD population will experience some form of it during their lifetime.   If you deal with this condition, you already know that some days feel like a small annoyance… while other days it practically drives you INSANE!  There is a litany of...

Is This Pharmacy Staple BAD For Your Immune System?

When’s the last time you walked through the aisles of your local pharmacy and thought to yourself…  THAT LOOKS DANGEROUS!  You sure shouldn’t think that!  After all, your pharmacy (or even the pharmacy aisle at your favorite big box store) is the one place you should feel confident there isn’t a danger to your health...

The COVID-19 pandemic is finally starting to show signs of slowing down… perhaps for good!  And while a welcome return to normalcy sure does feel good…   It doesn’t mean that COVID won’t continue to be part of our lives for the foreseeable future… and it doesn’t mean you shouldn’t continue to take steps to keep... 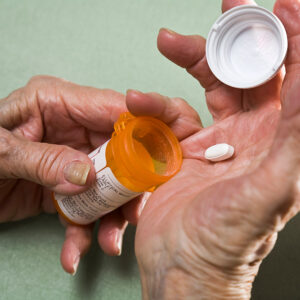 Well, folks… Big Pharma has done it again.   They’ve once again managed to convince the masses that one of their ‘miracle’ prescription drugs is perfectly safe – and can be handed out like candy.   And for so long, they’ve done such a good job of it, nobody seems to even bat an eye!  UNTIL TODAY! ...